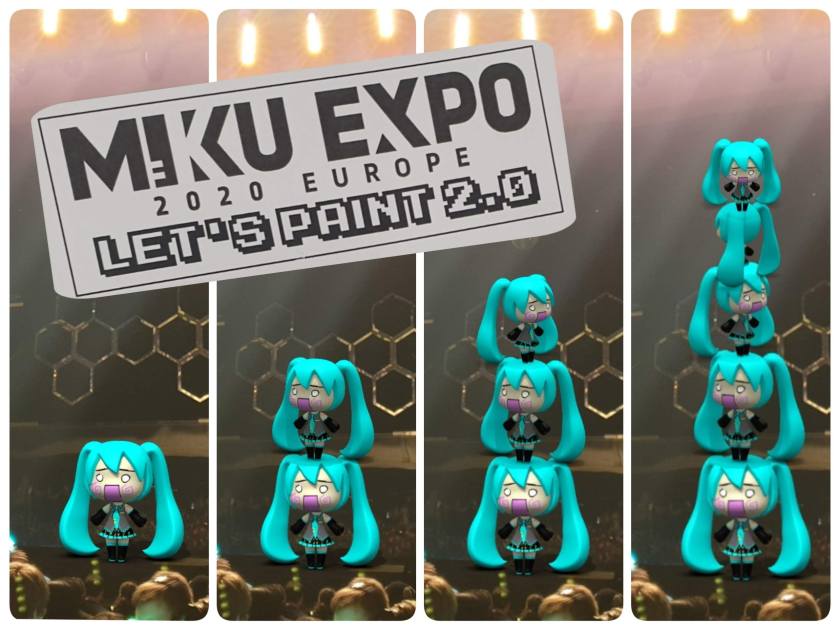 After the excitement of MIKUEXPO London last Saturday (January 11th 2020), a friend and I thought it would be fun to check out the Digital Colouring event being held at the Japan Centre Ichiba store in Westfield!

We were lucky, since because ours was the first city in the MIKUEXPO Europe lineup, also we were the first ones to experience the workshop! But first…

…merch buying time! London had fairly odd situation of having the workshop the Sunday AFTER the actual concert, meaning that pretty much most of the merchandise had already been sold, and more than a few people were left disappointed that we didn’t get quite enough glowsticks to go around. Despite this, there were a reasonable amount of hoodies and T-shirts available, as well as stickers, wristbands and glowstick inserts.

Not only was there the European tour merch available – there were plenty of regular Vocaloid goods there too, including framed prints, mugs and posters. We managed to nab the last one of the posters with art by kuroshishi, which I’ve wanted for a while, as well as a wristband each (one for Rin and one for Len). I was really happy to get the T-Shirt with the design from artist Tim Löchner, since not only was it my favourite piece of artwork out of all of the MIKUEXPO Europe 2020 goods, but unlike the other shirt and hoodie which had the rough, brittle texture of paint on them, this one is gorgeously smooth and comfortable.

After buying our wares, we went and had a look at the colouring event. Similar to with the concert, in order to guarantee an opportunity to join in with the fun, you had to queue up reasonably early. Because I decided to cosplay to the event, we ended up getting there by around 12PM (whoops…). By the time we got there, the line was already pretty long, and we decided that there was no chance that we were waiting in that queue for who-knows-how-long. Just as we were about to leave the store though, I spotted one of my friends that I met at the concert the day before! They were already participating in the event, but I was able to talk to them about what they were doing.

Each person received two white sheets of paper, one of which had an outline of the “My Miku” doll. The second sheet had instructions explaining how to do the digital colouring side of everything: all the magic happened courtesy of a QR code in the top left corner of the page! The organisers of the event were lovely, and after overhearing how sad we were about not getting to join in with the event properly, they gave us one of the tutorial sheets to use. So as soon as we left the store, we found some seats in the shopping centre and got to work!

After scanning the QR code, a 3D model base of Miku showed up, ready to be coloured. It’s actually very similar to the O-Miku figures we saw at Mikuexpo last year! (if the QR doesn’t work for you, just type the link: http://paint.mikuexpo.com)

My friend got off to a quick start, finding the controls in the teensy tiny web app easy enough. I, on the other hand, found the colour picker particularly awkward, since trying to get something as simple as a reasonable skin tone was… pretty darn tricky. The controls definitely need a little development, but for a small, time-limited app, it was pretty fun!

By clicking on the coloured square in the top left corner, you brought up the colour palette. From there, you could choose a colour, and with the vertical slider on the side, you could determine the saturation. By pressing “okay”, you get a horizontal slider in the top left, which dictates the size of your brush. If you want, you can start drawing on your Miku!

The eyedropper tool below it allows you to pick a colour that’s already on miku that you’d like to use, and the bucket tool will fill an entire area of her in block colour. Below that is the button to turn Miku around, so that you can draw on the back of her too! And if you wanna zoom in or move your perspective of Miku to get to those awkward angles (like around her arms), use the “move” tool at the bottom. One last handy tool is the “Mirror” tool, which meant that if you coloured, say, Miku’s left arm, it would automatically colour her right arm as a mirrored image of the first. This is really useful for creating patterns and whatnot.

Here is the final result of our hard work:

Can you guess what inspired my Miku? You would think that making any complex details in this app is near impossible, but we tried to show that, with lots of patience and practice, you could make something pretty cool!

Once you were finished with your drawing, you had to make sure to save it! Click on the three lines in the top left corner and you’d be able to save and load your design into the app. That definitely helped us when we accidentally pressed the “refresh” button instead of the “back step” button (which reversed one step you’d done for colouring your Miku, found in the bottom right corner).

Once happy with your Miku, you could click on the “Studio Mode” button to view a 3D representation of your very own Miku! In this section, you could play with the exposure, brightness, length and position of the shadow, the intensity of the reflection of Miku on the floor. You can also take a photo or use an existing photo and use is as a background for your Miku. I have to admit, I had wayyy too much fun with this part.

Similar to the previous section, here you can view your Miku from all angles using the tools in the bottom left. Once you’d created a composition you liked, you could save it as a photo to your device! If you wanted to make any improvements, all you had to do was press the back button (top left).

All in all, the day was pretty successful! Participants in the event managed to get some free gifts, consisting of a “Local Miku” badge and small stylus pen! Unfortunately we didn’t get these, since we didn’t actually enter the designated area, but it was still nice to be able to join in somehow. Overall, it was a tiring but fun day, and I really enjoyed cosplaying to the event.

Did any of you manage to get to the Digital Colouring Event at Ichiba? Make sure to drop any photos you got in the comments section on the original Facebook post – we’d love to see them. And make sure to use the tags #MIKUEXPO2020 , #MYMIKU as well as tagging Ichiba with @Ichibalondon if you upload any photos to your own social media!

That’s all from me! I hope that anyone who went to MIKUEXPO had an awesome time, and now we can finally pass the baton over to France. The “MIKUEXPO Let’s Paint workshop 2.0” will be held today (Wednesday 15th January) and The MIKUEXPO France concert will be happening January 16th. We hope you all enjoy your time at MIKUEXPO Europe!